Supai is a place of unfiltered joy. Deep in the Grand Canyon is a hidden gem, one you have to fight to get to know. The initial sight of the most brilliant blue water and the roar of the waterfall are almost too sweet to handle. The 12 miles of dust and anticipation make the falls even more incredible  because you had to work for it and chase it so delighting in it makes every second of ached worth it.

Going into Supai, I was not entirely sure what to expect. I had friends that had done the hike but I had never myself. I didn’t want to underestimate it but I also did not want to  overthink the trek and freak myself out. I knew it would be long, dusty, and that the nearly-40-pound pack would start to hurt likely from the get-go. But what I did not know was that the canyon walls during sunrise would be one of the most beautiful sights I have witnessed, or that my backpack would actually start to feel like it was a part of me (it was really hard to walk when it came off- I felt way too light), or that the excitement that came once at camp would be really worth it all.

During our stay, we adventured from waterfall to waterfall. A few of my favorites were Havasupai Falls, Curtain, Upper, and Mooney Falls. Each one a beauty of its own, typically involving something dangerous to get to (like scaling the side of the canyon with some rickety chains). During downtime, we hung out at the campsite, along the river (which served as a built-in shower) and played cards, cooked freeze-dried meals, swung in hammocks, and chatted.  The entire time you are in Supai, you feel small in the very best way and you feel at home, as if your heart somehow knows that this is what it was designed for.

I’m sure that this feeling is just a taste of heaven and all of its goodness. The little bursts we get the pleasure of experiencing here on Earth don’t hold a light to the unquenchable joy we will continually drink in during eternity. I think this is why I have been so sad to leave. The part of me that was touching Heaven now feels lack-luster at home. Four concrete walls aren’t the same as two canyon ones. The noise of my fan does not put me to sleep like the sound of the river. The errands are not as lively as jumping off 40 foot falls. Bumping into a few semi-strangers and making small talks leaves me longing for more uninterrupted and intentional heart to hearts. While in the canyon, I chatted with friends about how hard it is to maintain the joy and essence of trips like this when returning home but how desperately I wanted to bring this posture into my daily life. I have been seeking to align my heart the way it was just hours ago but life makes it hard. The choice is much harder up here.

I am so grateful for places like Supai and the opportunity to adventure through them. These places speak to who I am and remind me to seek joy in the everyday. It is so refreshing to get away and to just exist with no to-do list.

One of my favorite parts of this trip was the conversations that took place and the relationships that formed. Even though we were constantly surrounded by breath-taking beauty, I was even more enthralled by the hearts that I got to know. Something about stripping away the idea of being put-together and adding a layer of grime and dirt allows people to let their guards down more easily. I got to know more about some of my friends in this week than in months elsewhere. Supai is a beautiful place that ushers and encourages friendships. But you do not need to be in the “no service” zone of the Grand Canyon to achieve this- I now have a new found respect for designated time without the phone and am set on finding more time to live without it- and encourage you to do the same!

Signs that read “descend at own risk” are littered throughout Supai. Warning signs that preface the danger to come but the glory that also awaits. Reading this can induce fear but after my time in the canyon, I want to commit to running towards these, to chasing them, and to always make the decision to descend because the reward always seems to outweigh the risk. 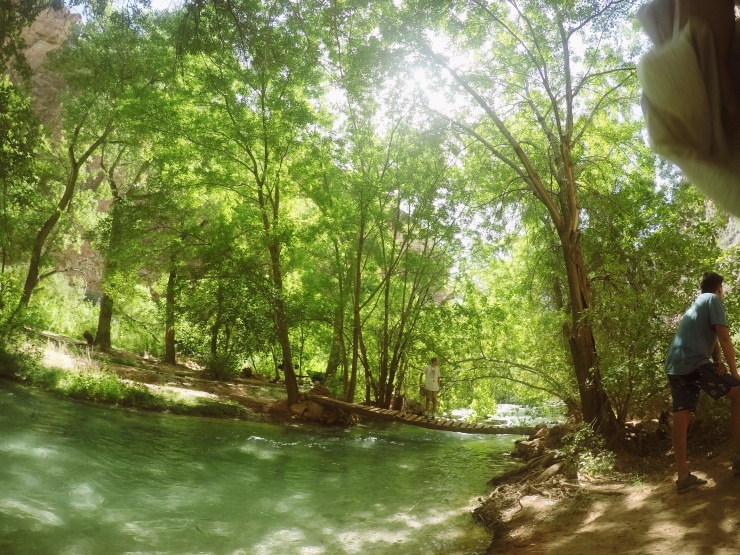